⚠ You're reading an article that was written quite a while ago, in 2011.

While you're reading it, please remember that times change and people change; this article might or might not represent my attitude, knowledge, opinions, or understanding today. I ask you to, as always, read actively. 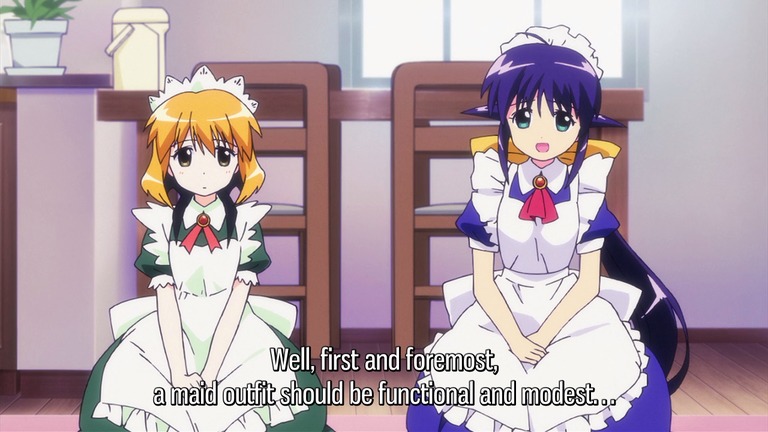 It's hard to overstate Gainax's influence on the Japanese animation industry. Contrarily, though, Gainax's works are often highly derivative (in the best sense of the word), taking tropes, ideas, and animation methods pioneered by others and combining them in new ways to create staggeringly original works. Evangelion isn't just a giant robot anime; neither is FLCL or Gurren Lagann, for that matter. And Mahoromatic turns the magical-girlfriend genre on its head.

But there's something else going on at Gainax, intentional or not. Many of their most notable works -- those with the strongest thematic impetus -- have been succeeded later by another series that seems its thematic inverse. There's two sides to every story; sometimes, Gainax has animated both of them. This article series will examine some of their classic stories in light of this idea.

From a Perfect Heart to No Heart

This entry will tackle He is My Master, a series that I've blogged about before. But, since then, I've had the pleasure of watching Gainax's other (and better-known) maid anime, Mahoromatic.

On the surface, it's easy to say that these are similar shows. Made within a few years of each other, they are both adaptations of existing source material, rather than Gainax original stories. They both concern teenage boys who unexpectedly find themselves living with (several!) cute maids, around the same age as themselves. Both series have "younger sister" maid characters voiced by Ai Shimizu The lead maid falls in love with her master. There's gratuitous fanservice -- in Mahoromatic's case, more than many R-rated films would allow. Said maids have a problem with some of their master's lecherous habits. Mahoro's most famous line, after all, is "ecchi na no wa ikenai to omoimasu," or "I think that dirty thoughts are bad!"

But that's essentially where the similarities end. Mahoromatic is a series with a split personality, one that uses its filler episodes as paeans to the joys of ordinary life in order to drive home the seriousness of its wider story. He is My Master, on the other hand, is all filler. That's not necessarily a bad thing: slice-of-life shows are judged on their ability to make nothing happen for ten or twenty hours at a time. But My Master's characters are so devoid of any humanity that I suspect the folks at Gainax did it intentionally.

Mahoromatic predates My Master by a few years. In the interim, something very important happened in the otaku subculture: the maid café explosion. Gainax themselves reminded fans of this fact by bringing back Mahoro for a short OVA series in 2009, in which she helps create a maid café for a neighborhood festival. Notably, she is forced to exchange her usual uniform for an abbreviated maid costume, which proves dangerously useless. 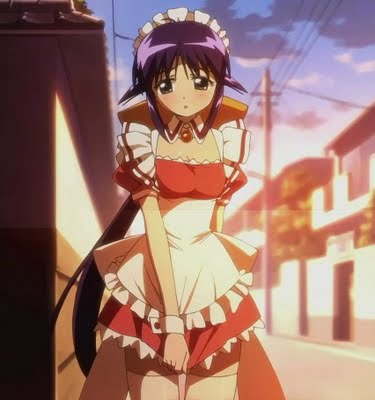 Still, it's costumes like this one that My Master's maids wear throughout the show. In the context of that series' humor, it makes sense.

It seems likely that, coming off the success of Mahoromatic, Gainax felt they could exploit their new expertise in the genre, as it were. They even handed over some of the production responsibilities to Shaft. But this is Gainax, after all, and they don't make ordinary shows. My Master seems to have been written and presented as a parody of the genre: the master has no redeeming qualities, yet the girl still falls for him. The obligatory cute animal is an alligator. While it's possible to write off (and even enjoy) the series as nothing more than a particular nadir of juvenilia, it's obvious that Gainax had maids on the brain.

There is another consideration. Mahoromatic is well known for its "Gainax ending;" in this case, a final episode that differs strongly in tone and subject matter from the rest of the series. It was a bold, risky move, and although it ends with a gift to the show's fans, it was sure to alienate some people. In a sense, phoning in a show like He is My Master after that could almost be seen as relaxation therapy for the studio. And it would make Gainax money.

The long and short of it, though, is that Mahoro is the girl with the perfect heart. The series has already demonstrated its staying power -- how often do shows get new OVAs, six years after a conclusive finale? -- while He is My Master barely registered during the year it aired.

That's not true of the other "inverse" shows I want to write about, though. They are all notable in their own right. I'm planning these future articles on the topic:

Author's note, 2018 -- I never wrote these other essays. Likely I won't in the future. My views on the above have probably changed as I've gotten older as well. He Is My Master is still terrible. I'd like to revisit Mahoromatic sometime.

My blog doesn't have a comment system, but I do accept letters. If you are interested in commenting, send me an email and I may publish your comments, in edited form.